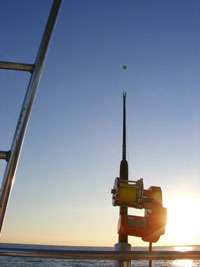 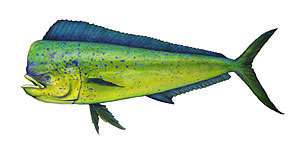 The mahi-mahi is commonly known as the dolphin-fish. These are surface-dwelling ray-finned fish found in off-shore temperate, tropical and subtropical waters worldwide. Mahi-mahi means “very strong” in Hawaiian.

Out of the water, the fish often change color among several hues (giving rise to their Spanish name, dorado maverikos, “golden maverick”), finally fading to a muted yellow-grey upon death.

Mahi-mahi live 4 to 5 years. Catches average 15 to 29 lbs. They seldom exceed 33 lbs, and any mahi-mahi over 40 lbs. is considered exceptional.

Swordfish also known as broadbill, are large, highly migratory, predatory fish characterized by a long, flat bill. They are a popular sport fish of the billfish category, though elusive. Swordfish are elongated, round-bodied, and lose all teeth and scales by adulthood. These fish are found widely in tropical and temperate parts of the Atlantic, Pacific and Indian Oceans, and can typically be found from near the surface to a depth of 1,800 ft. They commonly reach 9 ft in length, and the maximum reported is 14.9 ft in length and 1,400 lbs in weight.

Swordfish are vigorous, powerful fighters. When hooked or harpooned, they have been known to dive so quickly, they have impaled their swords into the ocean bottom up to their eyes. Although no unprovoked attacks on humans have been reported, swordfish can be very dangerous when harpooned. They have run their swords through the planking of small boats when hurt.

Sailfish are predominately blue to gray in color and have a characteristic erectile dorsal fin known as a sail, which often stretches the entire length of the back. Another notable characteristic is the elongated bill, resembling that of the swordfish and other marlins. They are therefore described as billfish in sport fishing circles.

Sailfish grow quickly, reaching 4-5 ft in length in a single year, and feed on the surface or at mid-depths on smaller forage fish and squid. Individuals have been clocked at speeds of up to 70 mph. Generally, sailfish do not grow to more than 10 ft in length and rarely weigh over 200 lbs.

The sail is normally kept folded down and to the side when swimming, but it may be raised when the sailfish feels threatened or excited, making the fish appear much larger than it actually is.

Sailfish are highly prized game fish and are known for their incredible jumps. They can appear in a startling array of colors, from subdued browns and grays to vibrant purples and even silver. Their body colors are often highlighted by stripes of iridescent blue and silver dots. Sailfish can change their colors almost instantly; a change controlled by their nervous system. The sailfish can rapidly turn its body light blue with yellowish stripes when excited.

Marlin have an elongated body, a spear-like snout or bill, and a long rigid dorsal fin, which extends forward to form a crest. Its common name is thought to derive from its resemblance to a sailor’s marlinspike. Marlin are incredibly fast swimmers, reaching speeds of about 68 mph.

Marlin are rarely table fare, appearing mostly in fine restaurants. Most modern sport fishermen release marlin after unhooking. However, the fisherman in Ernest Hemingway’s novella The Old Man and the Sea was described as having caught an 18-foot marlin to sell its meat.

Tuna are fast swimmers, and can swim up to 50 miles per hour when pursuing prey. Unlike most fish, which have white flesh, the muscle tissue of tuna ranges from pink to dark red.

Their coloring metallic blue on top and shimmering silver-white on the bottom helps camouflage them from above and below. Bluefin Tuna can grow to 15 feet long and weigh over 1,000 pounds.

Atlantic bluefins are warm-blooded, which is a rare trait among fish, and are comfortable in colder waters.

The yellowtail snapper is an abundant species of snapper found along the North American coast of the Atlantic Ocean. In certain reefs in the Florida Keys, this beautifully colored fish is commonly spotted among divers and snorkelers. The yellow tailed snapper is also a popular and abundant game fish that makes excellent table fare. Yellowtail snapper is highly prized for its light, flaky meat and is considered by some to be one of, if not the best of the snapper family.

Yellowtail snapper are typically caught in 30-120 feet of water on and around reefs and other structure. 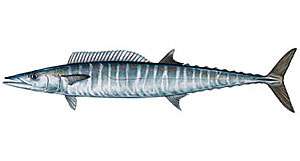 The wahoo is a scombrid fish found worldwide in tropical and subtropical seas. It is best known to sports fishermen, as its speed and high-quality flesh make it a prize game fish. In Hawaii, the wahoo is known as “ono”. Many Hispanic areas of the Caribbean and Central America refer to this fish as “Peto”.

The body is elongated and covered with small, scarcely visible scales; the back is an iridescent blue, while the sides are silvery, with a pattern of vertical blue bars. These colors fade rapidly at death. The mouth is large, and both the upper and lower jaws have a somewhat sharper appearance than those of king or Spanish mackerel. Specimens have been recorded at up to 8 ft in length, and weighing up to 180 lbs.

The Greater amberjack usually lives between 65 ft and 230 ft of depth. It is the largest in the Carangidae family, with a maximum length of 3 ft.

It is a fast swimming fish with similar habits to the kingfish. They are silver-blue with a golden side line, with a brown band crossing over the eye area. The Greater amberjack is a powerful hunter which feeds on other fish and invertebrates.

The king mackerel is a medium sized fish, typically encountered from 5 to 30 lbs., but is known to exceed 90 lbs. T

he entire body is covered with very small, hardly visible, loosely attached scales. The first (spiny) dorsal fin is entirely colorless and is normally folded back into a body groove, as are the pelvic fins. The lateral line starts high on the shoulder, dips abruptly at mid-body and then continues as a wavy horizontal line to the tail.

Coloration is olive on the back fading to silver with a rosy iridescence on the sides, fading to white on the belly. Fish under 10 pounds usually show yellowish brown spots on the flanks. Its cutting edged teeth are large, uniform, closely spaced and flattened from side to side.

We many encounter many species of shark while sportfishing in the Florida Keys, including tiger sharks, bull sharks, lemon sharks, black tip sharks, mako sharks, grey reef sharks and, hammerhead sharks. Fishing for sharks is entirely safe and we do practice catch and release with sharks to help preserve the species.

Sharks have a covering of dermal denticles that protects their skin from damage and parasites, and improves their fluid dynamics so the shark can move faster. They have several sets of replaceable teeth.

Well-known species such as the great white shark, tiger shark, and the hammerhead are apex predators, at the top of the underwater food chain. Their extraordinary skills as predators fascinate and frighten humans, even as their survival is under serious threat from fishing and other human activities. We do our best to make sure any sharks we catch are returned to the ocean in good condition.